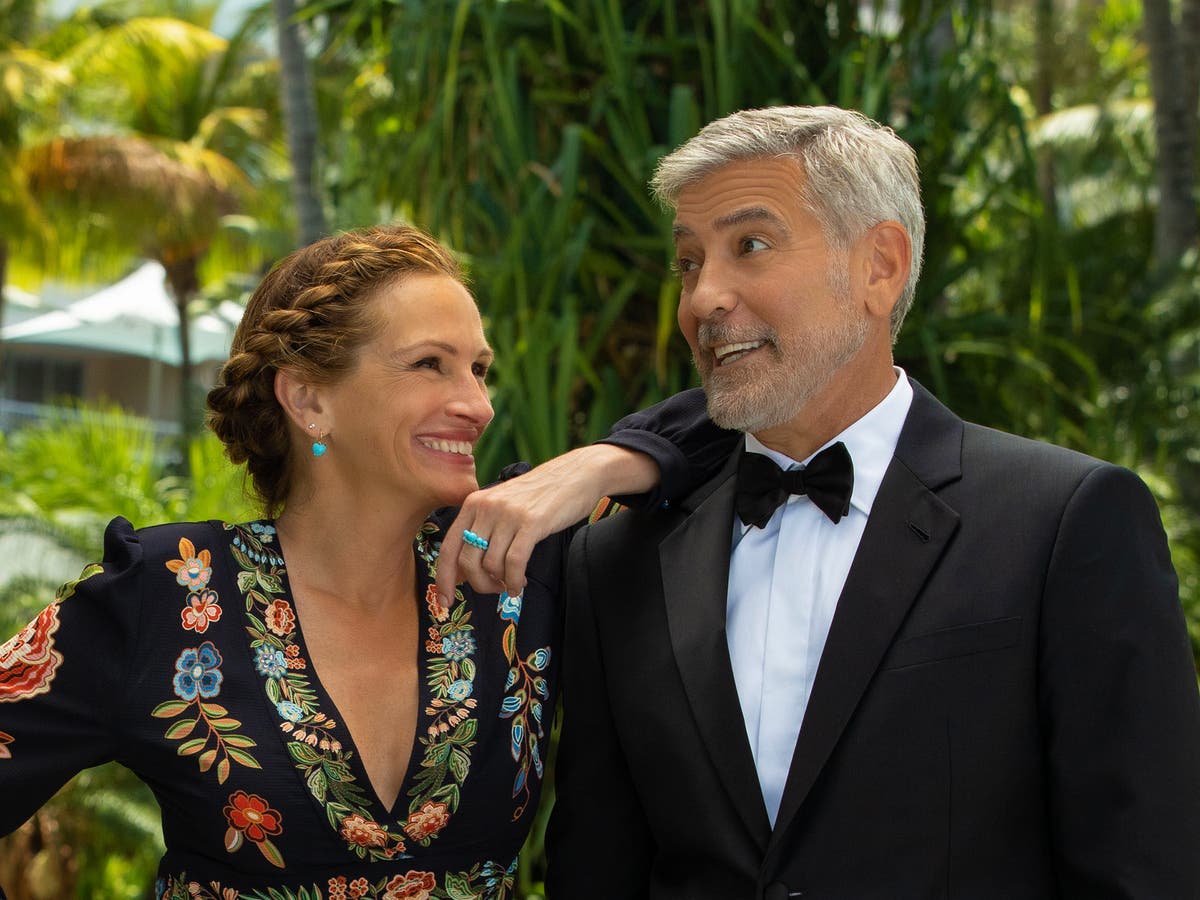 It’s a joy to watch Julia Roberts and George Clooney fall in love. It’s an even greater joy to watch them bicker. As embittered exes in Ticket to Paradise, flying to Bali in order to stop the whirlwind nuptials of their daughter (Kaitlyn Dever) to a local seaweed farmer (Maxime Bouttier), the duo have been provided a full buffet of snappish asides. They’re heirs to that great screwball tradition. Think back to Claudette Colbert, hitching a car ride with a coquettish flash of the leg in order to tease Clarke Gable in It Happened One Night. Or to Cary Grant at wit’s end in the face of Katharine Hepburn’s scatterbrained antics in Bringing Up Baby.

Here, when Georgia (Roberts) and David (Clooney) are – incidentally – sat next to each other at their daughter’s graduation, they tussle over armrests. When they’re – again, incidentally – booked together on the plane over, they lock themselves into a death grip while riding out a patch of rough turbulence. And, when they find out their hotel rooms adjoin – at this point, the coincidences seem a little suspicious – they immediately launch into an argument over David’s thunderous snores.

Ticket to Paradise immediately recalls the tempestuous relationship Roberts and Clooney shared as the romantic leads of the Ocean’s Eleven films. Though they’ve racked up a fair amount of screen time together, including in 2016’s Money Monster, this is their first genuine romantic comedy as a pair. That it works is largely because their methods haven’t changed. Aside from the joke in which a dolphin makes a B-line for David’s crotch (he later claims it’s a leg injury, but the evidence speaks for itself), and some drunken boomer dancing, there’s very little here that’s gurning or goofy.

The draw of a Roberts/Clooney vehicle, then, is the poker game of words played by two people who’ve always carried them with an air of security. They’re the appointed adults in the room, so it doesn’t really matter how ferociously they fight – you know they’re sensitive enough never to dig their claws in so deep that it draws blood. Matters will always be settled. And love, inevitably, will blossom.

Director Ol Parker’s job is to simply paint around the two, in bright but soothing shades. He’s cast the film in the same mold as The Best Exotic Marigold Hotel (2011) and Mama Mia! Here We Go Again (2018). The film presents Bali as a postcard-ready fantasy that’ll have eager romantics booking flights. But Parker also doesn’t forget that it’s a real place, with real people living in it. The locals – including Bouttier’s Gede and his father, Agung Pindha’s dryly humorous Wayan – are key to the story.

Parker’s script, co-written with Daniel Pipski, is far more sentimental than it is humorous. It’s rooted in a parent’s fear that their children are such perfect models of themselves that they’re bound to repeat the same mistakes. David, at one point, confesses that he’s at his most vulnerable in the highs of his daughter’s life – “that’s when you get scared, because you don’t want things to change”.

It’s familiar emotional territory, and Dever and Bouttier feel particularly underserved by how blandly straightforward their romance is, despite it supposedly providing the film’s central propulsion. Parker does seem somewhat aware of this, considering he’s taken the easiest route and thrown Billie Lourd into the mix, as Dever’s college bestie. She’s essentially playing the same scene-stealing, bon vivant weirdo as in 2019’s book smart: hysterically funny while always having a minimum of two day-glo-tinged cocktails glued to her hands. Emily in Paris‘s Lucas Bravo, too, delivers the perfect, totally witless comic reactions as Georgia’s French himbo pilot boyfriend Paul.

Combined, Lourd and Bravo provide a key antithesis to Roberts and Clooney’s sophisticated shtick. They’re the right ingredients. Parker uses them in the right amounts. It’s (almost) enough to justify the fact the film ends with a mid-jump freeze frame.

‘Ticket to Paradise’ is in theaters from Tuesday 20 September

To be or not to be cancelled: how directors deal with Shakespeare’s problematic side | stage