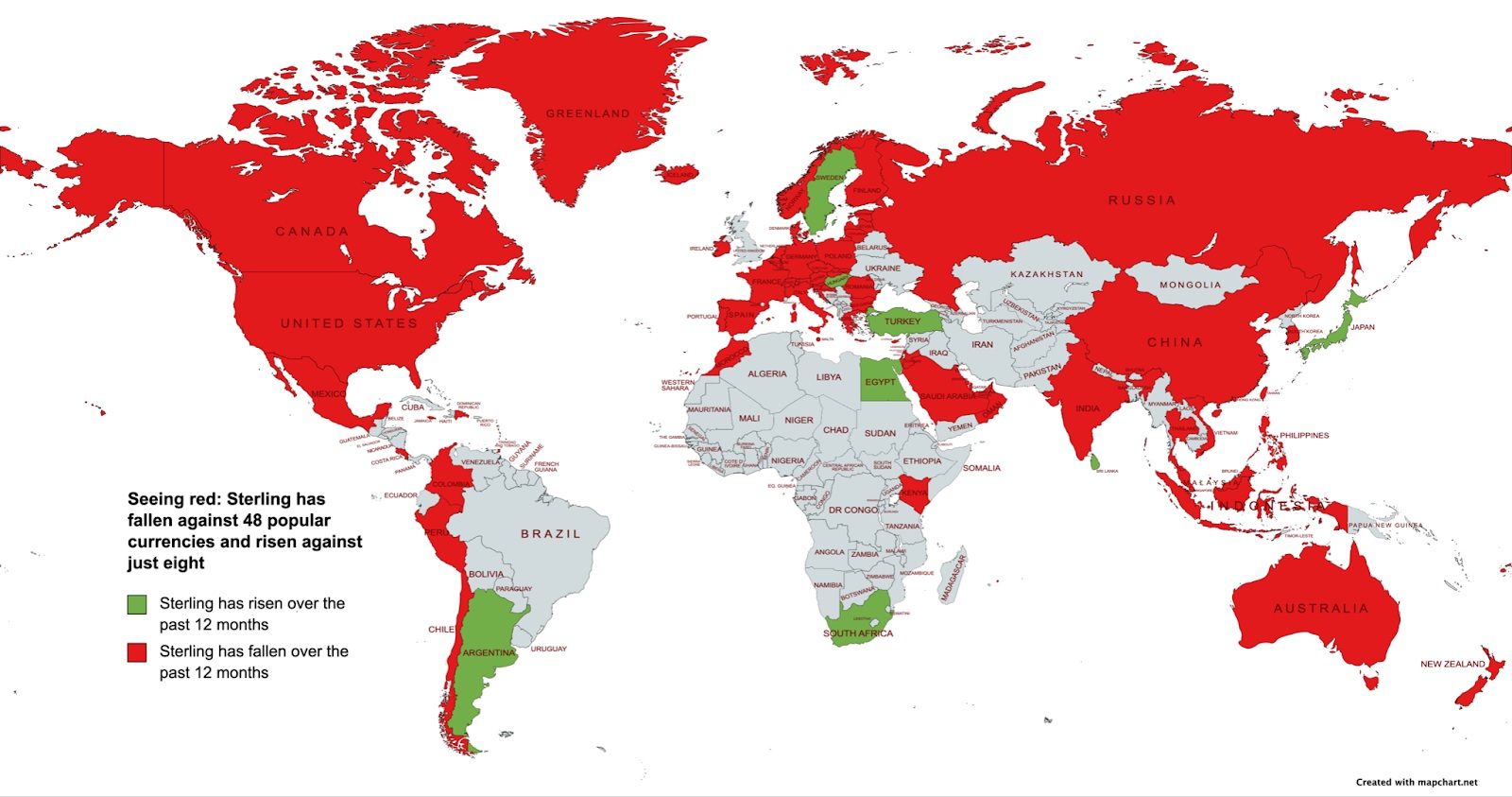 The pound has tanked again against the dollar and is now down 18 per cent year-on-year.

As the Bank of England prepares to hike interest rates later today, Sterling has endured a rough ride on the currency markets over the last 12 months.

As a result, this is making holidays more expensive in 48 out of the 56 most visited global destinations.

The cost of trips to tourist meccas like Disneyworld and Ayers Rock have jumped after the pound lost 18 per cent of its value against the US greenback and nearly 10 per cent against the Aussie dollar.

Meanwhile, short-haul trips to European favorites France, Spain and Portugal are getting more expensive, with sterling losing 3 per cent against the euro amid soaring levels of UK Government debt and fears about a faltering economy.

But as a map produced by travel money firm No 1 Currency shows, it’s not all bad news for those planning a half-term or Christmas getaway.

Weekend Read: As the Pound crashes to record low, what can be done to halt Sterling’s freefall?

reen countries are where the pound has made gains. Red is where it’s sinking:

The pound’s relative strength is greatest in Turkey, where runaway inflation hit 80% in August (eight times higher than Britain) and the Turkish Lira has shed three quarters of its value against the pound since this time last year.

Despite its current economic woes, Turkey remains a firm favorite among British sunseekers thanks to its spectacular coastline, great food and warm Mediterranean climate.

For those willing to venture further, the balmy beaches of Sri Lanka are less than half the price (down 52 per cent) they were this time last year.

The island has long enjoyed a reputation as a surfer’s paradise, and also boasts a number of World Heritage sites as well as fabulous cuisine.

In the third spot is Argentina. The Argentine peso has depreciated 22 per cent against the pound over the last year, with some economists warning it could fall further.

Discussing the findings with City AM This morning, Simon Phillips, Managing Director at No1 Currency commented: “British holidaymakers are having to budget carefully this year amid the double-whammy of a cost of living crisis at home and a sinking pound abroad.”

He added: “Thankfully, there are still some countries where your money goes much further this year than last – all of which offer travelers the chance to enjoy new experiences and make memories that will last a lifetime.”

“Turkey, Hungary and Argentina all offer strong value for those aiming for a half-term getaway,” he concluded.