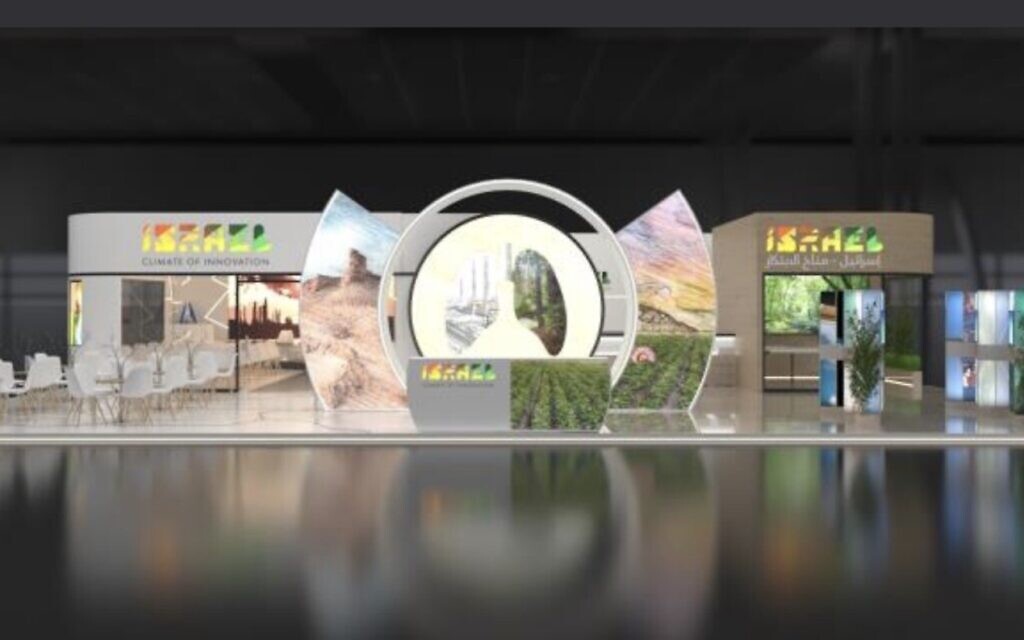 Israel will host a pavilion for the first time at a United Nations climate conference, promoting 10 groundbreaking climate tech companies and offering more than 30 events at the upcoming COP27, set to take place in the Egyptian seaside resort of Sharm el Sheikh in November.

The pavilion — to be financed by eight government ministries — will open on November 7 at the conference’s Innovation Zone.

The space will feature a “technology boulevard,” spotlighting 10 companies — each with their own promotional video — as well as a 40-seat lecture space and a meeting room.

The technology boulevard will showcase 10 Israeli climate tech companies, that were selected out of 100 candidates. The winners’ names were announced Wednesday at the end of Israel’s first climate tech conference, organized by PLANETech, an Israeli nonprofit innovation community.

They are: H2Prowhich is promoting hydrogen technology developed by the Grand Technion Energy Program at the Technion – Israel Institute of Technology in Haifa; GeneCellwhich has developed a way of using hydrogen by storing it in ammonia for off-grid and backup power that can be used across a range of markets; Remilka developer of cultured milk and dairy; Aleph Farmswhich makes cultivated meat and grows steaks from modified cattle cells; Groundwork BioAgwhich develops a fungus-based inoculant for commercial agriculture to enhance and strengthen crops; Tomorrow.iowhich has created a weather and climate analytics platform; bee-wisewith its robotic beehives; UBQ Materialswhich converts household trash, organic, paper and plastic into a bio-based plastic substitute; HomeBiogas, which turns waste into cooking gas and liquid fertilizer; and williotwhich has developed battery-free Bluetooth-based chips to tag onto consumer-packaged goods that can collect and analyze physical and environmental conditions across the supply chain.

The 10 companies were selected for meeting certain criteria, including current climate impact, potential climate impact, technology innovation, team and leadership, economic potential, and status and relevance for the Mediterranean region. 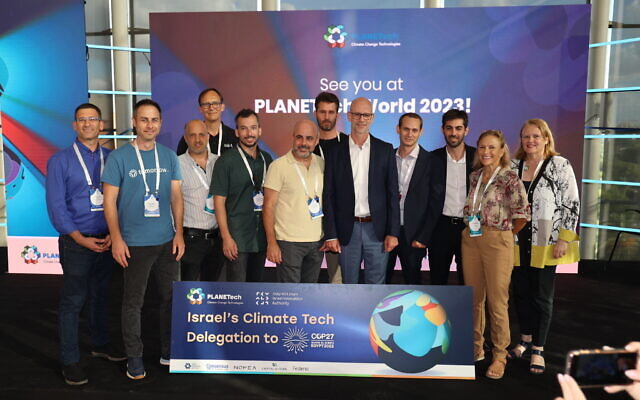 Representatives of the ten climate companies that will showcase their technologies as part of the Israeli delegation to the upcoming COP27 United Nations climate conference in Egypt in November. The winners were announced at Israel’s first climate tech conference, PLANETech World 2022, held at the Yitzhak Rabin Center, Tel Aviv, on September 21, 2022. (Perry Mendelboym)

On the eve of last year’s COP26 in Glasgow, Scotland, then-prime minister Naftali Bennett said, “For the world to get to zero emissions by 2050, changing our behavior will do less than half the job. The other half will come from technology that has yet to be developed. That’s where Israel has to lead.”

Other conference events featuring Israeli organizations will include Tomorrow.io appearing at the pavilion of the United Nations Framework Convention on Climate Change (UNFCC), the Good Food Institute presenting at a smart food pavilion, and YKCenter hosting a session on climate finance.

According to Ayelet Rosen, head of the Environmental Protection Ministry’s Division of Multilateral Environmental Agreements, this year’s confidence is unlikely to produce any groundbreaking agreements or initiatives, like those reached, for example, in Paris in 2015, where nations committed themselves to keeping temperature rises to 2 degrees Celsius (3.6˚F), and preferably to 1.5 degrees Celsius (2.7˚F), compared with pre-industrial times.

She said she expected the focus instead to be on developing countries.

We’re really pleased that you’ve read X Times of Israel articles in the past month.

That’s why we started the Times of Israel ten years ago – to provide discerning readers like you with must-read coverage of Israel and the Jewish world.

So now we have a request. Unlike other news outlets, we haven’t put up a paywall. But as the journalism we do is costly, we invite readers for whom The Times of Israel has become important to help support our work by joining The Times of Israel Community.

For as little as $6 a month you can help support our quality journalism while enjoying The Times of Israel AD-FREEas well as accessing exclusive content Available only to Times of Israel Community members.

Thank you,
David Horovitz, Founding Editor of The Times of Israel

Already a member? Sign in to stop seeing this