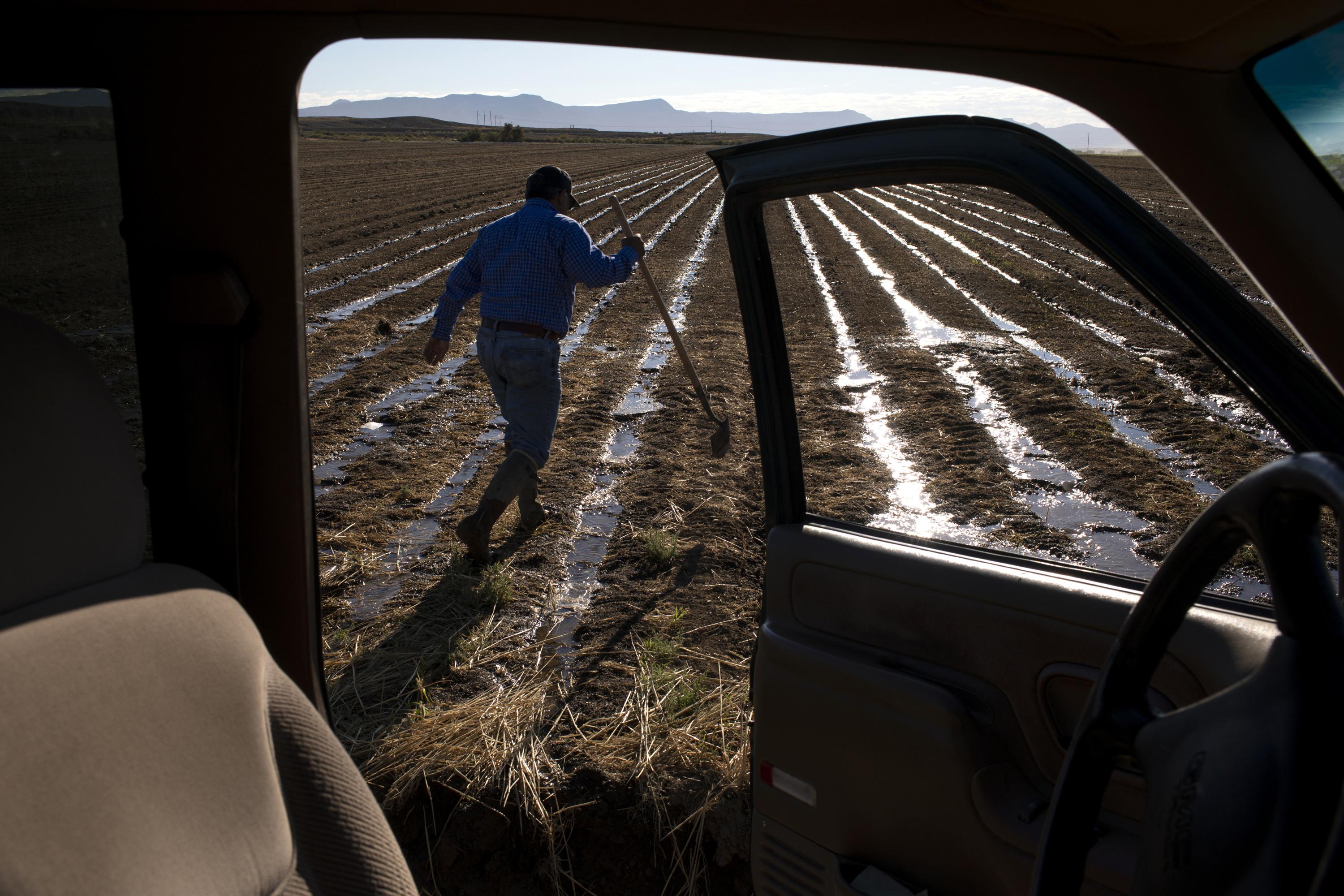 LOMA, Colo. (AP) — Under the blazing afternoon sun, Joe Bernal navigates a shiny-green John Deere tractor onto a dirt road a few miles north of downtown Fruita. Bernal is headed to cut hay in a field a few hundred feet down the road. On his way to him, he points out the land his family has acquired over the years. His grandparents had 150 acres over there. His parents of him bought this land here. His great grandparents of him, who showed up in 1925, lived in a house right there.

Surrounding Bernal’s land are the views of the Grand Valley, a strip of high desert situated on Colorado’s Western Slope marked by dusty mesas and cliffs and the winding, ever-present Colorado River, which plunges down from the mountains to the east. Grand Valley farmers and ranchers use the water to irrigate tens of thousands of acres, growing everything from peaches and corn to wheat and alfalfa.

But since 2000 flows on the river have declined 20% and water levels at Lake Powell and Lake Mead have dropped to less than 30% of their combined storage. With the river overtaxed, Grand Valley farmers now face some of the most urgent questions regarding the future of water in Colorado and the West. Questions about how agriculture, which accounts for about 70% of the state’s Colorado River water use, can be more efficient, whether water can be conserved and banked in Lake Powell and what, if anything, to do about someone looking to make a buck on the state’s most precious resource, so-called water speculators.

EDITOR’S NOTE: This is part of a collaborative series on the Colorado River on the eve of the Colorado River Compact, signed nearly 100 years ago. The Colorado Sun, The Associated Press, The Albuquerque Journal, The Salt Lake Tribune, The Arizona Daily Star and The Nevada Independent are working together to explore the pressures on the river in 2022.

In the Grand Valley, much of the concern around private, profit-driven investment in the river has focused on a New York investment firm called Water Asset Management, or WAM. Run by co-founder Disque Dean Jr., son of a New York real estate developer, WAM has spent millions buying farmland with valuable water rights in this part of Colorado. The company is the largest landowner in the influential Grand Valley Water Users Association, which operates the 55-mile Government Highline Canal. Western Slope farmers rely on the canal’s senior water rights to irrigate about 24,000 acres of farmland.

When the New York Times declared in a January 2021 headline that “Wall Street eyes billions in the Colorado’s water,” Colorado water users voiced significant concern about the company’s motives.

“The worry was that a New York hedge fund’s outside investors would not have the same economic and sociological calculus in deciding to lease or sell their water as a longtime resident would,” Anne Castle, a senior fellow at the Getches-Wilkinson Center for Natural Resources, Energy, and the Environment at the University of Colorado, said. “Generational farmers and ranchers are going to be thinking about the impact on their neighbors, the local communities and what their kids do if the water leaves the ranch.”

State politicians looked at addressing private water speculation during the most recent legislative session. Colorado law already requires water be put to a “beneficial use,” say, to irrigate a farm, supply taps in cities or be left in the river for environmental or recreational purposes. You can’t just buy water rights and sit on them. A draft state bill, however, tried to examine whether it might be viable to curb the sale of water in Colorado purchased specifically to turn a profit later on. But telling people what they can and can’t do with their private property rights is a tricky proposition. The bill did not make it beyond the Agriculture and Natural Resources Committee.

Three years ago, Water Asset Management purchased a farm from a landowner who was leasing land to Bernal, who farms alfalfa, corn and other crops north of Fruita. A member of the water users association board, Bernal has since leased a few other WAM-owned fields. The way he puts it, he’s neither WAM’s advocate nor their adversary. “I keep saying, ‘So far so good,’” Bernal said. “Am I glad they’re here? Not really. Would I have invited them in? No. How are they now? They’re as good as any landlord I’ve had.”

A few years ago, through the Grand Valley Water Users, Bernal enrolled some land in a water conservation project known as the System Conservation Pilot Program, sometimes referred to as a “buy and dry” or lease-fallowing program. The project, which ran from 2015 to 2018, was designed partly as a test of how paying farmers to voluntarily and temporarily fallow land might actually look in practice.

Restarting the program was a key part of a plan the Upper Basin states of Colorado, Utah, New Mexico and Wyoming released in June in response to Bureau of Reclamation Commissioner Camille Touton’s call to cut between 2 million and 4 million acre-feet of Colorado River water use by next year. The original, four-year Upper Basin program, funded by major water utilities and money from the Walton Family Foundation, spent more than $8 million and reduced consumptive use by roughly 50,000 acre-feet, according to reports compiled by the Upper Colorado River Commission.

Colorado’s US Sen. John Hickenlooper introduced legislation in late July that would effectively reauthorize the program. If the bill, which has yet to make it out of the Senate, eventually passes, there appears to be money on the other side in the form of the $4 billion in drought funding included in the Inflation Reduction Act spearheaded in part by US Sen. Michael Bennet. The federal money will be available through the Bureau of Reclamation for states and other public entities to pay water users to voluntarily reduce use.

When Bernal first heard about the pilot program concept, he thought it could open up some useful possibilities for him, a way to optimize his operation. Maybe he could get some guaranteed income. Or maybe this would give him a chance to do some land leveling on a field he wouldn’t be able to do otherwise. Heck, maybe he could even just work a little less.

Grand Valley Water Users Association board member Troy Waters, a fifth-generation farmer north of Fruita, said he was at first resistant to this type of program, but did eventually participate in the initial pilot project and learned a lot by doing so.

“With all the issues that are going on on the Colorado River, I think programs like this might become a necessary evil,” Waters said. “I think Colorado is going to have to do their part; even though I still feel this whole mess is the Lower Basin’s fault — they created it. The Lower Basin states have just been willy-nilly drainin’ them reservoirs.”

But he also worries that efforts to curb water use could alter the character of the place he grew up, where the red rock plateau of the Colorado National Monument rises above the river. If too much land is fallowed, Bernal is concerned it could negatively impact the local co-op or the seed producer or the trucker who lives down the road or the part-time mechanic he employs or his son Bryan or nephew Mario Baleztena who do this work with him full time.

“Imagine if we didn’t have this irrigation system,” Bernal said. “There wouldn’t be anything to look at but the Monument.”

But it’s a delicate balance, he said. For instance, he knows the land he leases from WAM could be enrolled in a restarted system conservation project, bringing new revenue for the owners. “WAM would sure like to see a program,” he said.

“It could hurt the entire system if they try to put too much in,” Waters said of WAM potentially enrolling land in any future water savings program. Waters said he would want a program that didn’t allow any one individual to enroll too much land or for there to be too much ground fallowed in the valley as a whole.

“If you take out a quarter of the farm ground,” Waters said, “if it ain’t managed right, this whole valley will turn into a dust bowl.”