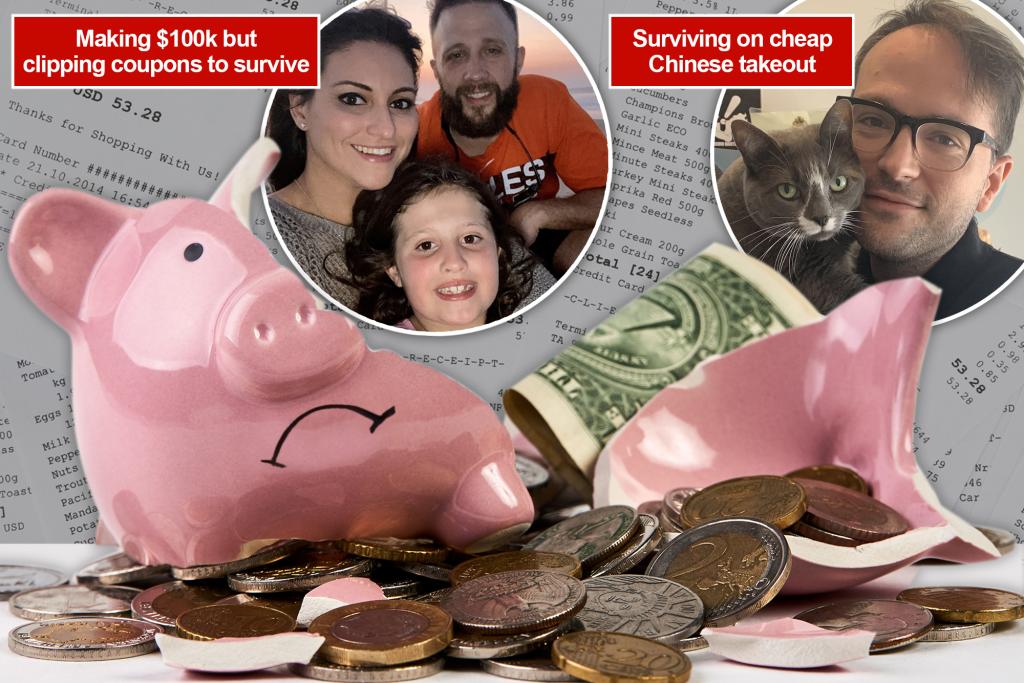 It’s a real kick in the pocketbook.

Yesterday, it was reported that inflation rose 8.3% in Augustadding to an already grim financial landscape.

Sure, gas prices are down slightly — but the cost of food, housing and other essentials remains sky-high. Across the country, Americans are struggling to get by and finding themselves having to pinch pennies.

“You want to be able to raise your child in a society where you’re able to give them the best and provide the best for them,” said Briana Howard, a 34-year-old healthcare worker who lives in Fairfax, Virginia, with her husband Ken Howard and 8-year-old daughter.

Here, she and four Americans reveal how the record inflation is wreaking havoc on their families and their futures.

Briana and Ken Howard make a combined $100,000 per year, but they’re cutting coupons and cutting back on luxuries. The family’s annual trip to the Outer Banks in North Carolina cost $700 more this summer compared to last, due to rising costs for rental properties and restaurants in the area. Their daughter’s summer camp cost $300 more this year, and an inconvenient car repair set the family back another $1,000. And, people are spending less on home repairs, cutting into Ken’s roofing business. Briana said they’re having to watch pennies in a way they never did a few years ago.

“We’re your typical middle-income average American family,” she told The Post. “We’re more mindful at the grocery store … It’s like, ‘What do we have a coupon for?’ I mindlessly picked up a pack of $10 grapes, that’s not something I can continue to do.”

Rob Abiuso, 55, a Long Island-based attorney, used to enjoy dinners out at the local steakhouse twice a week. No longer. These days, he’s working to just get by, and meals out mean going to a modest diner.

The cost of his home and car insurance have been a killer, and are up about 20%, he estimates.

“I make a good living for myself, but I said, ‘Why do I have no money in the bank?’ I finally started snooping around my insurance policies,” Abiuso told The Post. “I’m paying $11,500 in insurance for my home and cars — you tell me if that’s nuts.”

actor/comedian Gary DeNoia has long tended bars to make ends meet, so he was financially devastated by the pandemic. He lost his restaurant gig, and “a lot of performing opportunities obviously disappeared,” he told The Post.

Initially, the Jersey City resident found a cheaper apartment to reduce some of the strain. I have collected unemployment and “learned to be more resourceful.” The 38-year-old is now back working in restaurants and feels he’s making strides to dig himself out of the financial hole, but inflation and rent hikes have made it difficult.

“People have told me I lost weight, but I can’t afford groceries,” he said. “I used to go shopping and plan my meals for the week. But [now] a Fage yogurt is $10. A bag of Doritos is $7. It’s cheaper to eat takeout … I have never eaten this much Chinese takeout because the lunch special will last me three days.”

He’s also had to cut back on how much he feeds his beloved cats.

DeNoia’s rent has now gone up as has his electricity bill, which he says will take him more than a year to pay off. “I prioritize paying my rent. I always think, ‘What can I get away with not paying today?’ I would rather PSE&G is mad at me than my landlord.”

The comedian, who has a talent for impersonations, has seen one recent bright spot: a demand for Ray Liotta voiceovers and extra cash flow as a result.

He said: “You’d be surprised how many rappers want Ray Liotta voice on their album.”

A few years ago, Delaney Claycomb, 28, was earning $11 an hour working at Disneyworld and SeaWorld. She was living with a roommate and “was staying afloat.” Now Claycomb is married and makes about $46,000 with tips, managing a tuxedo rental store outside of Atlanta. But she feels like she’s sinking.

“I don’t feel like I am making more even though my salary is about two and half times what it was three years ago. It’s crazy,” Claycomb told The Post, blaming inflation, credit card interest rates and rising housing costs.

Her husband Dustin works in a warehouse and the couple dream of buying a house, but a large chunk of his wages are eaten up by health insurance premiums and union dues.

“Now, in this area, you can’t even find a broken down trailer for that price. This isn’t Los Angeles,” she said. “I just want to live in Buford, Georgia.”

Claycomb said she is saddled with a monthly rent of $1,600 and credit card debt from a medical issue. Ella’s husband Dustin is working overtime just to bring in extra cash.

“We looked at apartments near my job so I wouldn’t have to drive 30 or 40 miles a day, but we couldn’t afford it. We got the cheapest apartment we could find,” she said. “We’d love to have a kid, buy a house and a yard but we have to put it off.”

Hakeem Joseph, 33, moved his family from Queens to Atlanta three years ago in search of a lower cost of living. But it’s not low enough. Before the pandemic, his $85,000-a-year salary from him as a truck driver would have felt more like $100,000, he said. Now, he struggles to juggle food costs and energy bills. They can’t afford daycare, so Joseph’s wife, Annik, stays home with their 2- and 3-year-old kids.

Plus, he said he’s spending $500 per month on food and getting less than two shopping carts full of groceries.